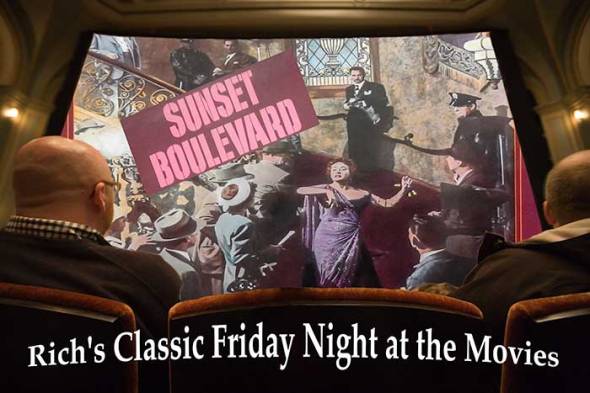 I had the opportunity to see Billy Wilder’s “Sunset Boulevard” on the big screen in a movie theater. The movie stars William Holden, Gloria Swanson, written by Billy Wilder, Charles Brackett, D.M. Marshman Jr. and directed by Billy Wilder. For those not familiar with him, 4 of his movies are on the American Film Institute’s 100 Greatest films ever made. They are “Some Like It Hot” (if you haven’t seen it, see it now), “The Apartment”, “Double Indemnity” (great movie) and “Sunset Boulevard”.

I own a copy of the movie on disc, but Turner Classic Movies, in conjunction with Fathom Events, has a Classic Film Series playing in selected theaters. “Sunset” was on the list.

“In Hollywood of the 50’s, the obscure screenplay writer Joe Gillis is not able to sell his work to the studios, is full of debts and is thinking in returning to his hometown to work in an office. While trying to escape from his creditors, he has a flat tire and parks his car in a decadent mansion in Sunset Boulevard. He meets the owner and former silent-movie star Norma Desmond, who lives alone with her butler and driver Max Von Mayerling. Norma is demented and believes she will return to the cinema industry, and is protected and isolated from the world by Max, who was her director and husband in the past and still loves her. Norma proposes Joe to move to the mansion and help her in writing a screenplay for her comeback to the cinema, and the small-time writer becomes her lover and gigolo. When Joe falls in love for the young aspirant writer Betty Schaefer, Norma becomes jealous and completely insane and her madness leads to a tragic end. Written by Claudio Carvalho, Rio de Janeiro, Brazil”

Acting in the film as themselves, Buster Keaton, Hedda Hopper, Ceil B. DeMille, H.B.Warner, Anna Q. Nilsson. The great director Erich Von Stroheim plays the butler and driver. Plus a young Jack Webb – “Just the facts, ma’am” – in a small supporting role.

Sunset was nominated for 11 Oscars and won 3. Info here.

The Empire Strikes Back

My Son, the Film Critic

My son has decided to offer his opinion on some recent films. He requested my help when he gets an image pertaining to the film that I put his face into the frame. He uses these images as a “cover” for his YouTube videos. 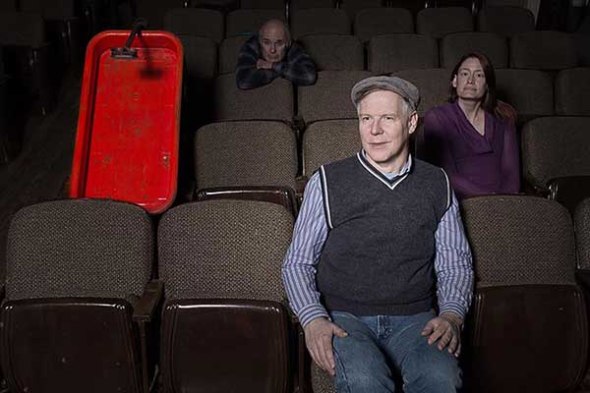 It’s the weekend and time to go to the movies!
You never know who you’ll be sitting next to at the movie theater because
everybody and EVERYTHING just loves going to the MOVIES!

The Stuff That Dreams Are Made Of…..

The title is a quote from a famous movie,
and the location above has been in many movies.
So it is “the stuff that dreams are made of…”

Hollywood on the Thames

Photograph taken years ago.
For those never having been to London,
this is where the London Eye will be built.
I wonder what they were filming.

In an earlier life, I went to school for filmmaking. The photograph above is from a film that I made. It was a comedy and I kept it simple since it was my first 16mm film and I was new to the process. When the project was completed, it made its way to a movie theater in Provincetown, Cape Cod, Massachusetts. I had a friend that ran the theater there and he was happy to show it. Recently he told me a story that I didn’t know –

“I never told you, but the night that we showed “The Children of Quasimodo” Filmmaker John Waters, actor Divine and Boston film critic David Brudinoy were in the audience. He returned a few nights later (we changed films every three days in the summer)to see another film with just Devine (not in drag). I asked him what he thought about your film. He said ‘It creeped me out….it was funny.’ Ha ha ha. He also said that he liked the idea that we were showing unadvertised underground films at our midnight shows as a bonus.”

Wow. The Man, They Myth, The Director saw my movie. That’s the closest I ever got to Hollywood.

Question of the Day

Who can name the movie this space ship is from? 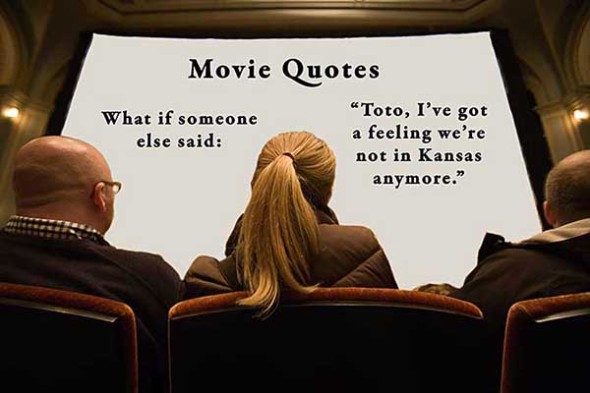 A thought came to mind – What if someone else said, “Say ‘hello’ to my little friend,” and not Scarface.